In this three-part video series Jamal will talk about the three pillars of project portfolio management: project value, portfolio balance and portfolio strategic alignment. Topics include:

Yet another company to be presented in our ongoing project portfolio management series is a satellite operator and producer that operates several dozen satellites providing communication services to businesses and government agencies, and broadcast TV and radio channels to audiences worldwide.

Despite an acceptable financial performance the executives of the company felt that there were several challenges awaiting the organization in the near future. One of the potential problems were saturated existing markets and stiff competition from other satellite operators.  As a result the company could not assure the same growth rates as were achieved in the previous years.

The organization needed to move into the new emerging markets and develop new products and services for both developed and developing countries.

As a result of the analysis of the challenges facing the organization the executive management created the following strategic plan for the upcoming five years: 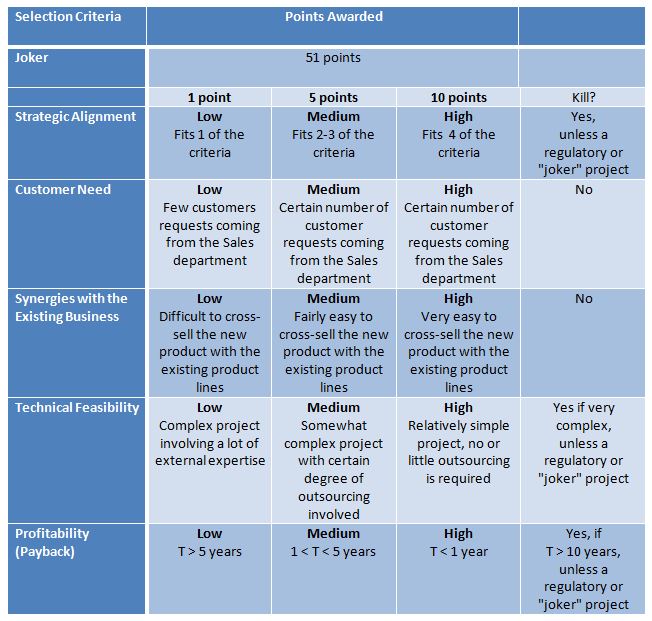 The first variable added to the model was the popular "strategic alignment" category. The points have been allocated in the following fashion:

The strategic fit variable has been deemed to be a "kill" category. If the project reflected none of the company strategies it would be automatically removed from the list, unless it was designated as "joker" or a regulatory project.

There are many different approaches to project prioritization, but the most popular ones are the financial method and the scoring model. In this posting let us examine the financial methodology. In a nutshell it implies choosing some kind of a financial criterion – be it a net present value, internal rate of return or some other formula – and calculating a value for each project. Once the ROI for each project has been calculated, the projects are ranked according to their ROIs in the descending order.

Let us look at an example of how it may happen. We have a company that wants to implement 10 projects and has 200 man-months in their resource pool (roughly speaking 20 people working together for one year including vacation time, and allowances for sick days, etc.)

The list of projects together with their expected ROIs is presented in Table 1: 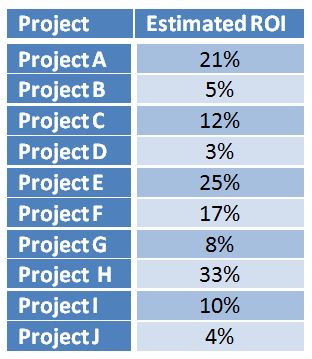 Next, the company needs to estimated the efforts required for each project and rank the projects according to their ROIs (see Table 2): 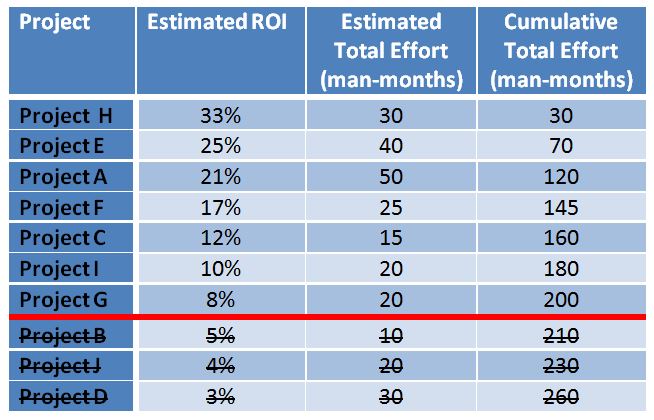 It is clear from Table 2 that the company in question can do projects H, E, A, F, C, I and G assuming their projections regarding the projects’ ROIs and efforts required were correct. Adding Project B to the mix will force the company to exceed their effort threshold.

While the purely financial models are very good at instilling the sense of discipline and accountability they all suffer from a couple of inherent problems. One can argue that every financial formula out there can be presented in the following form: 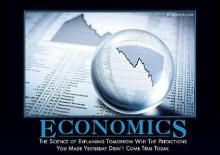 In this three-part series Jamal will talk about the basics of project portfolio management. The topics included are:

The next company to be discussed in our ongoing project portfolio management series is a rail transport engineering company that has encountered several challenges in the past several years. The organization has been reporting heavy losses from its operations for the past decade with no sign of potential improvement.

The analysis of the company's operations has shown that one of the main reasons for the poor performance of the company was the large number of products produced by the organization as a result of various customization requests from their customers.

This in its turn led  to a very large number of concurrent projects with a lion's share of them being customization rather than new product development ventures. As a result the quality of the project products has also declined leading to major delays in the product delivery to the customers.

As a result of the above-mentioned events the executives of the company came up with the following strategy:

The scoring model developed as a result of the project portfolio management initiative has consisted of the six variables (see also Table 1): 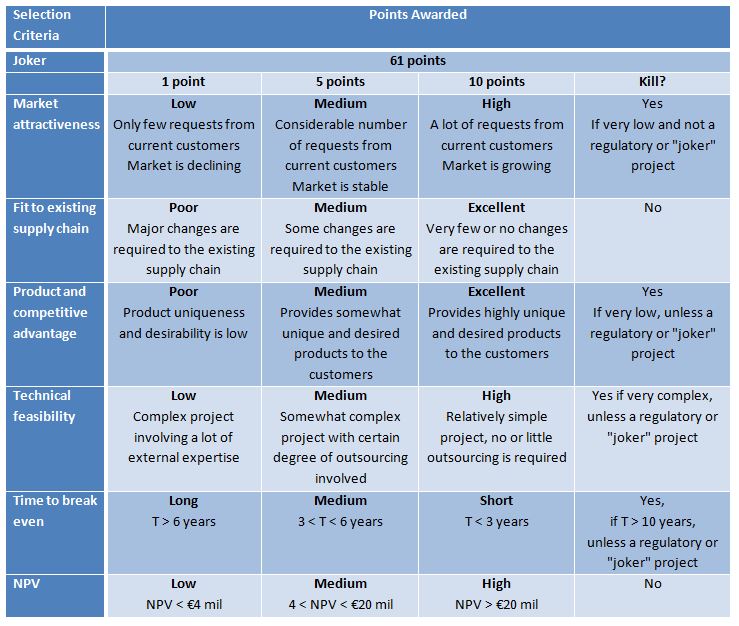 Interestingly enough the company management decided not to include the strategic fit as one of the variables in the model, arguing that the combination of the variables selected would address all of their strategic initiatives in a more efficient way.

One of the prevailing superstitions in project management is the "fixed pie" assumption. In other words, both sides assume that the project results, speaking mathematically, are binary - either the team delivers the project on time or it doesn't; either the project is on budget or over, etc. Fortunately, negotiations are typically not like NBA Finals when team A meets team B in a seven-game series where the winner gets the Larry O'Brien Championship Trophy and the loser goes home empty-handed.

In my experience, situations on most projects are similar to the fable involving two kids quarrelling over the ownership of an orange. Finally, their father enters the room and, operating under the fixed pie assumption, cuts the orange in two equal halves distributing the fruit between the brother and the sister. Interestingly enough, the brother eats the orange and throws away the peel. The sister uses the peel from her half as an ingredient in pastry while disposing of the fruit.

The situations between customers and project teams are often similar to the fable described previously: the underlying interests, constraints and risk tolerances of both parties are rarely identical. The proverbial pie usually looks quite different to each party. Hence, a good project manager can increase the size of the pie by looking for things that are of low cost to him and his team and high value to the customers (and vice versa).

Consider the following interaction between an experienced construction project manager and a customer:

Customer: “I would like to add another clause to our contract. If the work on the new mall is not finished by the deadline in the contract, I want your company to pay a penalty of $5,000,000”

PM: “Hmm, we have already signed the contract without the late penalty clause; I am not sure how our management would react to that …”

Customer: “I am sorry, but I have been instructed by my boss not to proceed ahead without this modification to the contract”

PM: “And may I ask you why you guys feel the need to add this clause?” 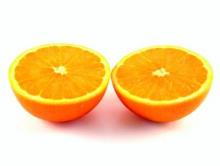 As a part of my project and portfolio management consulting practice I frequently get involved in advising various companies on how to run their real-life projects. In my previous article "How Not to Handle Project Negotiations" I shared a discussion that took place between three project stakeholders and invited the readers to find the mistakes that happened in that conversation. Today I am providing my proverbial two cents on the situation at hand ...

Sheila: You know about the problems we had with the release 4.0 of this product. You guys were late by 3 months, went almost 50% over budget and delivered way less features that we expected. Besides even the stuff you did deliver had serious quality issues.

Aha! So the previous similar project has been a failure on all three fronts: late, over budget and delivered less scope than expected. I wonder if optimistic estimation had anything to do with that?

Dan: Yes, and because of all these problems we lost two of our customers and several others warned us not to contact them until we have e-Merchant 5.0 ready with all the necessary features …

And these failures are beginning to have a strategic impact on the company's well-being ...

John: Yes, I understand your concerns and that is why we decided to invest a bit more time in scope definition in order to be able to better estimate project size, risks and duration.

Sounds like a very smart move to me. After all it is impossible to come up with any meaningful estimates until one knows the scope of work.

Dan: How much time are you planning to spend on requirements gathering?

John: We estimated that we would need about four weeks to elicit and document all the requirements and another week to for the team to conduct document inspections and generate estimates.

As a part of my project and portfolio management consulting practice I frequently get involved in advising various companies on how to run their real-life projects. Several years ago I was requested by a CEO of one organization to sit in a meeting where several stakeholders were supposed to discuss various aspects of the new "do-or-die" project. The ensuing conversation was so hilarious, that I excused myself from the room as soon as I could and recorded the entire exchange before it escaped my mind.

So, my challenge to you: how many estimation/negotiation handling mistakes were you able to spot in the following conversation?

John the project manager at the ABC Software Inc. a producer of e-Commerce software was preparing for a meeting with Dan, a VP of Sales and one of the original founders of the company and Sheila, a Senior Product Director. They were supposed to discuss the next major release of the company’s e-Merchant product.

Sheila: You know about the problems we had with the release 4.0 of this product. You guys were late by 3 months, went almost 50% over budget and delivered way less features that we expected. Besides even the stuff you did deliver had serious quality issues.

Dan: Yes, and because of all these problems we lost two of our customers and several others warned us not to contact them until we have e-Merchant 5.0 ready with all the necessary features …

John: Yes, I understand your concerns and that is why we decided to invest a bit more time in scope definition in order to be able to better estimate project size, risks and duration.

Dan: How much time are you planning to spend on requirements gathering?

Throughout my consulting and training engagement I frequently came across outrageous statements made by various company executives about both project management and project portfolio management. Today I want to provide you with a collections of all these pearls of wisdom and provide my (at times not very politically correct) answers to them.

So, without further ado, here we go with top seven dumb statements from executives:

Dumb Thing #1: "I am not sure why we are failing with our projects! After all we have MS Project installed on every desktop in the office"

Having MS Project or any other project management software installed on your computers won't do jacksh*t for you if you don't have proper skills, methodologies and processes implemented at your company. It is like picking up a random person off the street, giving him a Stradivari violin and expecting him to perform at Niccolo Paganini's level of without any training or guidance. Or how about buying a random guy a pair of most expensive soccer boots and the and the most advanced ball and expecting the person to instantaneously become the next Lionel Messi ?

Dumb Thing #2: We have a lot of receptionists sitting around doing nothing. Why don't we put them through a 2-day project management course and we can assign our (multimillion) projects to them? By the way, any chance you can cut the length of your workshop to one day?

No, I can't! And you need to realize that a project manager capable of running a multimillion dollar project is an accomplished professional with years of training, education and progressive experience. Putting a receptionist through a 2-day PM course may open her eyes to discover the exciting world of project management, but will most definitely not prepare her to run complex multimillion dollar projects. 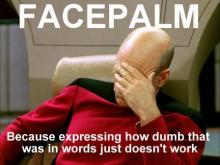