To develop or maintain a competitive advantage in the marketplace it is common practice to evaluate the actions of industry leaders if possible. Although we have discussed this thing called “project portfolio management” on this website numerous times, let us look at some historical data collected during two independent studies comparing the actions of industry leaders against the laggards*.

The first study that we will review attempted to answer the following question “Is there a systematic relationship between sound project portfolio management technique usage and the financial success of companies”.

The study included 205 businesses with an average of $6.4 billion in annual sales. The breakdown of the respondents by industry was: 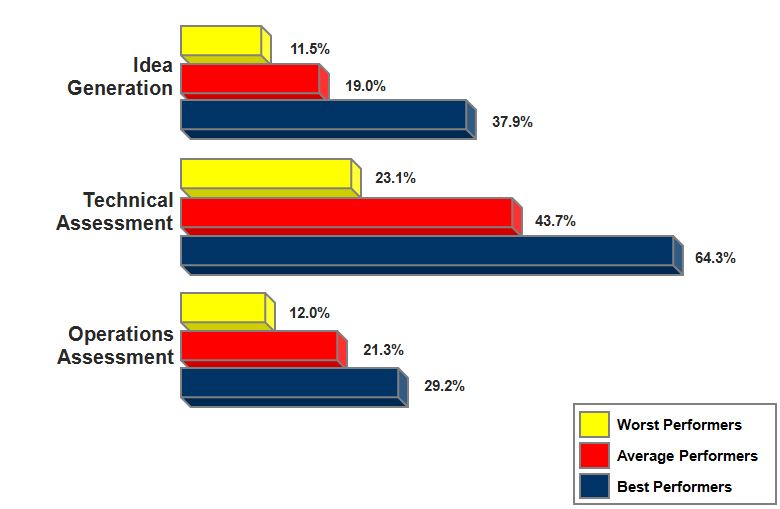 By the same token market research preceding the project approval was undertaken by almost 38% of leading organizations. Merely 7.7% of the worst-performing companies assessed  market conditions before  project approval (see Figure 2). 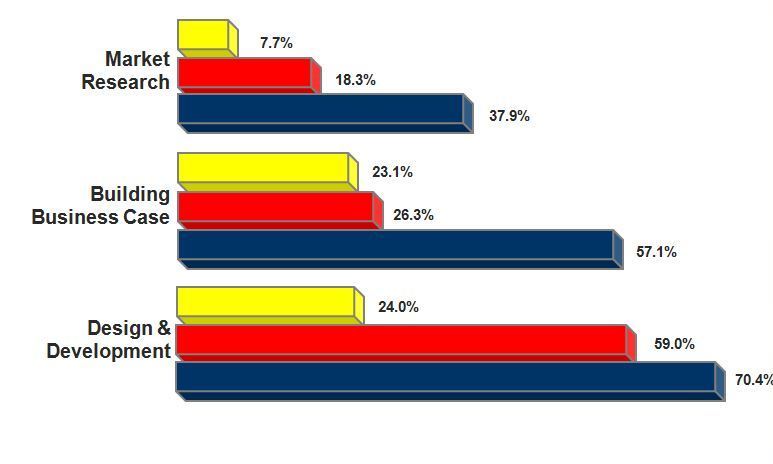 Business cases required for the project proposals assessment and approval were built by 57% of the industry leading firms. Just 23% of the worst performers invested time and effort into proper project proposal analysis.

Almost 45% of the leaders investigated product performance after the completion of the project, whereas only 7.7% of the worst-performing organizations researched whether the products they created had indeed performed as well as the initial forecasts (see Figure 3).

I remember an episode from my early career. I got hired as an independent consultant to run a project for a Canadian software company that was doing a project for a much larger US organization. Right at the very beginning of the project we did a high-level estimate with the help of our sales team and came up with a budget of $1.5 million. The customer rejected the number and claimed that they would be able to pay only $750,000. Our company's management agreed (don't ask me why) with the new "forecast", contracts were signed and the work commenced.

Several month later, once we had the detailed requirements document on our hands, we went through the estimation exercise again, this time the bottom-up version. The number we came up with? The same $1.5 million. We felt it would be the right thing to do to go back to the presidents of both organizations and let them know about the results of our findings ...

The reaction from the client's side has been very interesting to say the least. "We feel that Jamal is overly pessimistic in his approach, and we want him to be replaced with a more confident project manager!"

We Still Suck at Estimating

We all know about the famous examples of projects being grossly over budget and late. These include:

What are the explanations for such colossal failures? Currently there are at least three different schools of thought on this topic:

The classical economic theory states that our high failure rates on projects are very simple to explain. If companies take rational risks in order to earn abnormal incomes, these poor outcomes are inevitable. One of the key laws of the financial theory states that in a perfect market, the higher the expected return of an asset, the higher is the inherent risk associated with it.

You have probably read about the Queensland Department of Health payroll project, which ended in debacle with costs estimated at $1.2 billion. In the US, the Expeditionary Combat Support System project was cancelled after the US Air Force spent $1bn on its development.

The sad fact is these failures are not isolated instances; they’re just the most visible. Based on industry norms, less than 50 per cent of IT projects finish on time and on budget.

Discussions with experienced CIOs, consultants and project managers indicate there are many reasons for the failure of IT projects. If you step back from the individual causes, common themes emerge. A few are obvious; others are not well recognised.

Fuzzy goals: Many large projects fail because what they are trying to achieve isn’t made clear enough. There is no clear problem definition or clarity about the requirements, and the full scope of the project is not understood. One executive has an objective, but as the project moves forward new people, such as other executives, risk managers, and architects are introduced, adding their ideas of what would be best. The net result is unclear goals, expanding project scope and poor project design, all of which lead to unending debates and sliding timelines.

Over-optimism: Salespeople and internal project champions both want their proposal to succeed. However, in their desire to make the ‘sell’, they often underestimate the costs and over-emphasise the benef its. While preparing business cases, there is a tendency to maximise benefits and reduce costs to achieve the right return on investment (ROI). At times, this under-estimation is not intentional, but a result of the CIO having a poor understanding of the current situation and requirements. The CIO does not consider, or budget for, the effort to move from installing a system to actually achieving the benefits (new products, customers, capability).

Over-optimism results in unrealistic schedules. There is often an unjustified faith in technology (product, vendor or internal capability). Solution complexity is not evaluated either.

The definition of portfolio’s strategic alignment is fairly simple and straightforward: all of your projects must in one form or another assist the implementation of your company’s strategy. A very simple statement that at times is very difficult to explain. In order to do that, let us examine several examples of the project alignment and non-alignment.

At one point of time the executives of Société Bic (commonly referred to just as Bic), a French disposable consumer products company known for their razors, lighters, ballpoint pens and magnets made a very interesting decision. The company decided to enter … the ladies underwear market by designing, producing and selling among other things ladies pantyhose. Needless to say the company failed miserably with this project since the consumers were unable to see any link between Bic’s other products and underwear, because, of course, there was no link at all.

Although, as the urban saying goes “hindsight is 20/20” let us nevertheless try to assess this initiative from the strategic alignment perspective. Here is a list of potential questions one could direct at the Bic executives who proposed to add this project to the company portfolio:

It is obvious that none of the answers to the above questions were very encouraging had they been asked at the time of project initiation. Indeed, there was little or no alignment between the proposed endeavor and the overall company strategy.

Just wanted to let you know that my new book "Project Scope Management: A Practical Guide to Requirements for Engineering, Product, Construction, IT and Enterprise Projects" is now available on Kindle (click here to preview the book and read the editorial and customer reviews).

Here is what one of the co-authors of the first PMBOK had to say about it:

"The book unites the best practices of scope management from the fields of traditional project management, information technology, software development, engineering, product development, architecture, construction, and multidisciplinary projects. It is based on the most advanced and popular works by prominent authors and contains the latest advances in project scope management. It also concentrates on the hands-on practicality of tools and techniques rather than focusing on their academic prominence. Best of all, Jamal’s book is easy to read and uses informal, nonacademic language to explain all the key points."

but what about the proverbial gut feel?"

An attendee of my Project Portfolio Management

workshop at a large German conglomerate

Sometimes there comes a proposal across the steering committee's table that scores very low across almost all of the scoring criteria and yet the key decision makers feel that this is a very important and valuable initiative that can become the next breakthrough project that would generate millions if not billions of dollars for their company.

Let me use a somewhat “fantasy” scenario to illustrate this concept. The work on the first iPhone started in Apple in 2004. I don’t know whether Apple used a portfolio scoring model to assess its project ideas.  If they had one, I wouldn’t know what variables exactly they use in it. So, let us make two not-too-far-fetched assumptions:

If we continue our logical line of thinking, then it is safe to expand the second point and assume that their imaginary scoring model included parameters like:

Let us try to pretend that we are in the same room with Steve Jobs where he just proposed to embark on creating something called a “smart phone”. What would the assessment of this proposal look like in 2004?

Plans were announced on July 5th to build the Mall of the World, a mixed-use complex incorporating the world's largest shopping mall, to be built in the heart of Dubai.

A number of other mega-projects have also been announced in recent months. Although these plans reflect strong economic momentum in the UAE, they are also a cause for concern, presenting the risk of a dangerous mix of fresh debt and overcapacity emerging in the medium term. Further policy measures are needed to address these concerns.

The Mall of the World, to be completed by Dubai Holding, follows a number of other mega-projects announced recently, notably Deira Islands (a 15.3-km waterfront cluster of hotels, residential areas, resorts and retail) and Mohammed bin Rashid City District One (a development of 1,500 villas), while leading developers Emaar Properties, Nakheel and Dubai Properties have all unveiled new phases of existing projects.

Back To The Peak

The development frenzy comes as developers look to ride a surging wave of optimism about the property market. House prices in some areas have already rebounded past the previous peak reached in 2008. But the extent of new projects is fuel ling worries about the danger of overcapacity and the emirate lurching back into a renewed boom and bust cycle.

That happened previously in the wake of the global financial crisis of 2008 when a credit freeze and a loss of investor confidence caused values to tumble by more than half from their peaks. The ensuing meltdown prompted developers including Emaar Properties, Dubai Properties, Nakheel and Dubai Holding to stall projects or abandon them altogether. The latter two were particularly hard hit and underwent painful debt restructuring from which they have emerged only relatively recently. Since then Dubai's economy has regained strength and the financial health of large corporates, including developers, has significantly improved.

Returning home after a two-month business trip to Baku, Azerbaijan. Hello, Canada! Baku, see you in a couple of weeks :)