“Mutiny” On The High Seas
In 1707 a British fleet under the command of Sir Clowdisley Shovell was returning home after a long mission. The convoy encountered a heavy fog upon entering the English Channel. The admiral gathered his officers and navigators to get a definite fix on their location. After a short consultation the officers reported to Shovell that the fleet was safely off the coast of France. The admiral was about to issue an order to sail North to England when a sailor approached him and
asked his permission to speak.
The sailor told Sir Shovell that he was keeping track of their position by using his own navigational equipment. He also informed the admiral that the officers were badly mistaken and that the fleet was much closer to English shores than they anticipated. Therefore, according to the sailor it was very dangerous to proceed to England at full speed since they were in danger of wrecking on the Scilly Isles.
Sir Shovell ordered the man …hanged as a mutineer. Hours later, his flagship and three other boats of his fleet smashed into the rocks. He was swept ashore where, according to one of the legends, he was murdered by a woman who wanted his emerald ring. 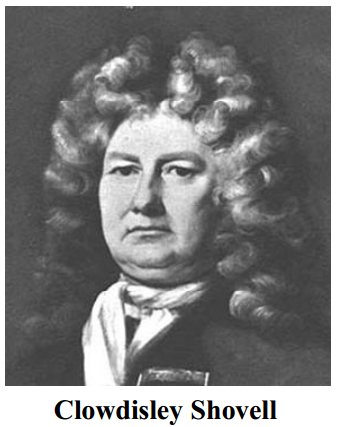