The Vikings were the Norse warriors, explorers and merchants who raided, explored and settled wide areas of England, Scotland, Ireland, Wales, Iceland, France, Spain, Africa, and Italy. They started their expansion by executing multiple raids of the English shores. According to the Anglo-Saxon Chronicles, Viking raiders struck England in 793 AD and raided Lindisfarne, the monastery that held Saint Cuthbert’s relics. Their raids continued to increase in frequency and the number of participating troops, until in 865 AD the Great Heathen Army led by the Brothers Ivar the Boneless, Halfdan and Ubbe Ragnarsson arrived in East Anglia and established their presence in the Northern England until they were driven out by the English king Harold Godwinson in 1066. The archeologists and linguists recently came to a conclusion that all British towns that end with "by" - for example, Ashby, Corby, Crosby, etc. - were founded and named by the Viking invaders.

Interestingly enough Harold lost the famous Battle of Hastings in the same year to another descendant of the Vikings (Normans) who settled in the Northern France a hundred or so years prior to the events, future king William the Conqueror (or William the Bastard as he was known before the battle).

According to the Russian "Primary Chronicle" three Viking - or Varangian as they were known in Russia - brothers Rurik, Truvor and Sineus were the first kings of the Russian royal dynasty that spanned from the 9th until the 16th century. And, yes, famous (or infamous) Russian tsar, Ivan the Terrible who was a last ruling member of the Rurikid dynasty can trace his roots directly to the Swedish warriors, who arrived in Russia almost seven centuries prior to his birth.

After establishing their foothold in Russia, many of the Vikings travelled South to the Caspian Sea and farther to the Byzantium Empire, where many of the enlisted in the much-feared Varangian Guard of the Byzantine Emperors.

In the XXI century a branch of the Norman royal family headed by the Roger I conquered Sicily and ruled there for the next two hundred years. Vikings also reached the shores of North America where Erik Thorvaldsson and his son Leif Ericson established several colonies in what is today known as Newfoundland.

One of the main questions posed by the Viking Expansion is how a relatively small group of soldiers can and explorers reach the lands so far away from their own country? Historian name many reasons for this phenomenon, but one of them they universally agree on is the Viking longship. These sturdy, light and agile vessels carried Norsemen across the Baltic, Mediterranean, Caspian seas, Atlantic Ocean and multiple rivers in the continental Europe. 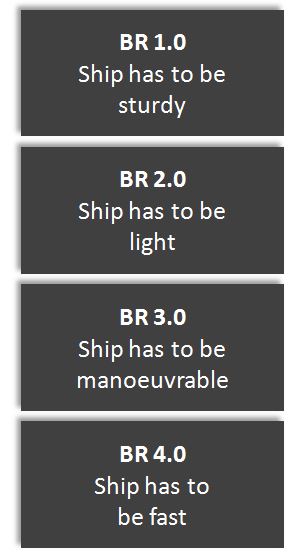 Here is a possible list of business requirements that the first Viking warriors might have imposed on their ship builders (see Figure 1):

The Norse engineers came up with a several ingenious solutions in order to address these objectives (see Figure 2).

First, they introduced (some argue for the first time in history) a keel to increase the robustness and the stability of their ships. Next, came the ribs of the vessel that were carefully selected from the naturally curved branches of the trees, rather than creating them by bending more easily available straight boards. The Norse shipbuilders assumed that the naturally curved timber would inherently be stronger and less susceptible to breaking. 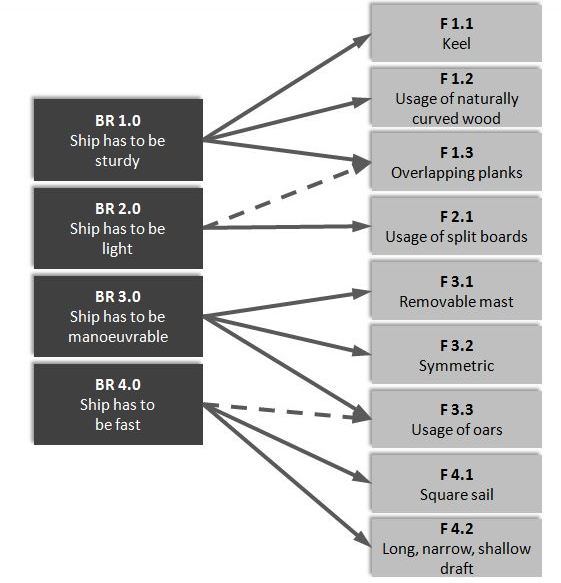 The next step was to use overlapping planks in the construction of the hull (see Figure 3). This clinker methodology served several purposes. First, it allowed the builders to use thinner boards without any negative effects on the structural integrity of the hull. This allowed decreasing the weight of the ships.

Second, this approach improved the flexibility of the boats, thus strengthening its sides in order to withstand the most violent storms.

Next, the Viking shipbuilders used split boards to construct their ships rather than sawn planks. Again they argued that the boards usually splint along their weakest points, thus increasing their sturdiness.

Introduction of the removable mast, the symmetric design of the ship and the square sail greatly improved the maneuverability of the Viking longships. Finally, the use of oars, the square sail and the long and narrow shape of the vessels had a great positive impact on the speed of the Viking boats.

This is an excerpt from my new book “Project Scope Management: A Practical Guide to Requirements for Engineering, Product, Construction, IT and Enterprise Projects” that is being published by CRC Press The book should soon be available on Amazon.

Please leave your feedback in the “Add New Comment” section below. Also, feel free to share this article via Facebook, Twitter, LinkedIn or Google Plus by clicking the buttons at the top of the page.