The Kashagan Oil Field has been discovered in 2000 in the Northern part of the Caspian Sea (see Figure 1). It was quickly confirmed that it was the world's largest discovery in the last 30 years, combined with the Tengiz Field located nearby, with a projected output close to that of the Ghawar field in Saudi Arabia. The recoverable oil reserves of the Kashagan Filed were estimated to be at 19-20 billion barrels.

The consortium consisting of several global energy players along with the government of Kazakhstan was formed in order to develop the reserves. The number of players and the make-up of the conglomerate changed several times over project lifecycle (we will come back to this fact at a later time), but as of 2012 the group consisted of the following players:

The project started in 2001 with an expected completion date of 2005. The allocated budget for this venture was US$10 billion. The oilfield was expected to become operational around 2005 and produce anywhere between 90,000 and 370,000 barrels (at peak production) a day. Needless to say, this project was viewed in Kazakhstan as one of the most important initiatives for the young country and was expected to generate considerable income for the government.

However the project fell 8 years behind the schedule and ended up costing a bit more than the original forecast. Depending on who one chooses to believe, the cost of the venture as of 2015 was either US$50 billion (official number provided by the government of Kazakhstan), US$115 billion (CNN Money's estimate) , or close to US$150 billion (number being mentioned in some publications).

To add insult to injury, shortly after the project finally went live in 2013, the operations had to be shut down due to a damaged main pipeline leaking a very dangerous hydrogen sulfide (H2S) gas into the atmosphere. The consortium was forced to burn off the gas as an emergency measure, releasing sulfur dioxide (SO2) into the atmosphere.

Before considering the scope of the project the managers of this venture had to consider the following facts and the resulting requirements (see Table 1): 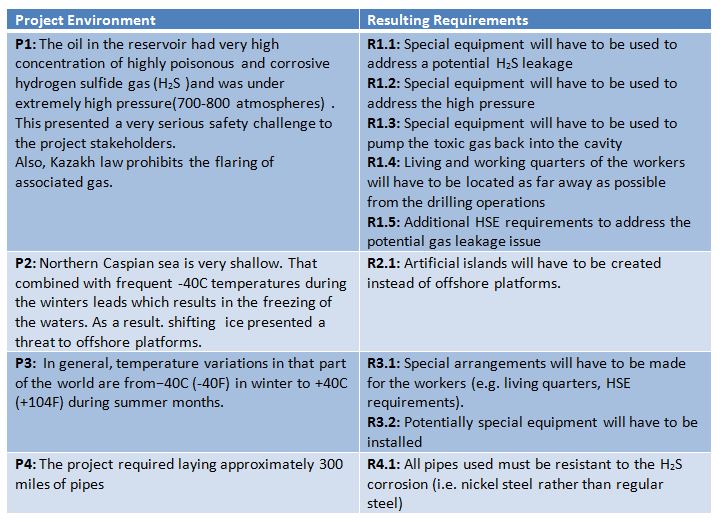 As of November of 2015 the facility is expected to become fully operational in 2017.