About six months ago I was contacted by a senior manager of a large company who proceeded to tell me: "Listen, we know that you have a project management course and we are interested in it … But would you be able to come in and just assess what it is that we are doing wrong with projects and maybe customize your course according to the findings?" Obviously I agreed to get together with him and we arranged for a meeting.

It turned out that his company was in the real estate development industry with strong ties to federal, provincial and municipal governments.

The organization had recently been created through a merger of several other smaller firms. Consequently, the company has experienced a significant growth in the number and size of their projects (the largest ones hovering at around $500 million). At the time, a typical company project portfolio consisted of approximately fifty ongoing projects, twenty of which were "cross-departmental" (i.e. required the involvement of five to ten or more different departments).

As a result of the above-mentioned events the company started experiencing problems in the areas of resource planning, resource allocation and project management. For example, while the employees of the company were complaining that they were too busy to fulfill all of their project and functional duties, the senior management was concerned that a lot of projects were late and the quality of final product was subpar. Furthermore, there were certain issues with proper planning of the projects, adequate project control and performance reporting. Many of the company's flagship megaprojects were over budget by almost 50% and some of them were close to a year late.

The bottom line expressed by one of the executives was:

"There is something horribly wrong with our projects . . . we are not entirely sure what it is and where to start since there seem to be too many problems."

I suggested that we start by interviewing the cross-section of organization's employees starting all the way at the top of the company (i.e. C-level executives) down to department heads, project specialists (the company did not have any designated project managers) and even some outsiders, including customers and suppliers.

The idea behind this suggestion was that it would be more appropriate to collect and understand people's issues with projects and propose solutions that address these problems directly rather than come up with an "off-the-shelf", best-practices solution. Also we believed that there is a better chance of people accepting our solutions if you can map them directly to problems mentioned by the employees. We also concluded that an informal approach to information gathering would be more appropriate for this exercise. As a result, all of the data presented in this article was collected mainly through one-on-one interviews.

Thinktank Consulting did not initially impose any standardized questions on the interviewees, but after a certain number of meetings several key issues started emerging repeatedly and therefore the rest of participants were asked to provide their opinions on these issues.

The overall results of the assessment stage are summarized in Table 1.

We can see right away that an overwhelming number of people interviewed agreed that communication channels are not working properly – especially on large, strategic projects.

Analysis of the freeform comments from the interview participants suggests that there is a specific lack of project communications on large strategic projects especially during the initial stages when the scope and potential impacts of the project are being defined.

Commonality of the Project Management Approach

Also, an overwhelming majority of interviewees thought that there was a lack of commonality in training and methodology with respect to project management in the organization.

A review of comments from the participants in the survey shows that running projects properly, and especially handover of the projects from one department to another, appears to be the key concerns of company employees.

Many of the people interviewed raised concerns about the feasibility of projects undertaken by the company in the first place. "Sometimes it seems that we take on projects just to prove that we can, and sometimes the projects are initiated by a simple 'Wouldn't it be cool if we could do this . . .' " mentioned one of the department directors during an interview.

Another interesting aspect was discovered during the assessment phase: the perceptions of whether the projects were on time and on budget were quite different between the senior management and the general project team members. Specifically, both department heads and executives had trouble answering the following question: "Do you feel that your projects are mostly delivered on time and on budget?" Analysis of freestyle comments, however, allowed us to understand the reasons behind this. It appears that since cost and time commitments were typically not properly recorded or tracked, it was very difficult for people not involved in the projects directly (i.e. department directors and senior executives) to be aware of their status.

We also discovered that underestimation was an issue at the company due either to direct pressure applied from above, or overly optimistic forecasts created sometimes to please the management of the company, or to obtain approval on projects that would not have been approved otherwise.

The following guiding principles were used for this project in general and in the process of generating the recommendations:

The following action items were given to the company based on the issues identified in the first stage:

Note: Although a "Business Case” document should initiate the project management methodology chain, it was decided to postpone the implementation of this step until Phase 3 – Portfolio Management implementation. This was because the organization already had a project selection procedure, albeit somewhat deficient.

Additional Items and Next Steps

This is a continuation of Implementing Project Management at a Functional Organization. At the conclusion of the first phase of our work, a list of action items was given to the company based on the issues identified in the first stage.  If you wish to reference the first part of this article, which appeared on May 5, 2010, please click here.

We also strongly recommended to the company's management that they try to capture the "before" organizational project performance metrics with respect to time, budget, scope and stakeholder satisfaction. This data will be required in order to compare the results of the pilot project and decide whether it is beneficial for the company to move ahead to the next step in the project management framework initiative.

Further, it will be necessary to consider an efficient way of communicating project results (Phase 1 and all subsequent phases) to the entire company at each key milestone of the entire program. To this end, we proposed the creation of a "Project Management Framework" page on the company Intranet. 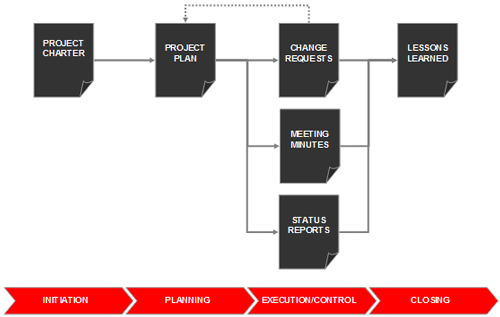 Note: Figures 3 to 6 demonstrate the linkage between the issues voiced by the company's employees during the assessment stage of the project and the solutions proposed.

The following steps were undertaken as a result of the above-mentioned recommendations:

There were several lessons that we learned during the implementation of this initiative. Among them were: