When dealing with stakeholders who do not have much experience in project management we inevitably encounter a situation where we have to provide “quick” estimates early in the project life cycle. The science of project management encourages us to use plus-minus estimates, ranges and coarse estimates (see more on the topic: Five Proper Ways to Present Project Estimates).

However, usually the stakeholders are very keen to hear very precise numbers like “the project duration is going to be 9 months and 3 days” or “the total budget is going to be $245,433”.

So, how do you explain to your customers that as soon as you started generating project estimates (especially the early ones), you have entered the domain of uncertainty?

I usually like to demonstrate the principle of uncertainty by picking a simple example completely unrelated to the project at hand and dissect it piece by piece right in front of their eyes.

Will the customer want Feature X?

In other words, will the customer decide to add Feature X to the dozens (hundreds, thousands) of other features already added to the project scope?

Example: Will the customer decide to add the “Landscaping” feature to the “Build a New Home” project?

Will the customer want the “Honda Civic” or “Ferrari” version of Feature X?

Will the customer prefer to go with a cheaper and simpler version of the chosen feature, or opt for a luxury kind?

If you implement the “Honda Civic” version of Feature X, will the customer later change his mind and demand the “Ferrari” version after all?

Example: I am sure it never happened on your projects, but is there a chance that the customer who initially decided to go with ten Eastern White Pines, will change her mind and opt for fifty Little Gem Magnolias? 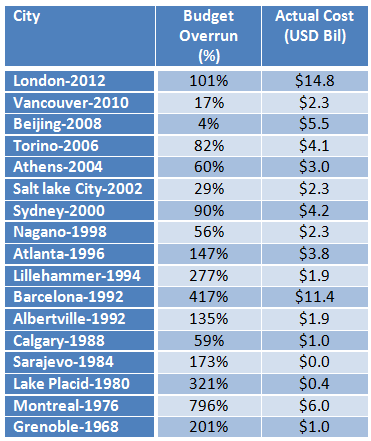 S: Hi, my name is Pascal, and I am a newly-appointed Director of Portfolio Management at company X. My goals today are to learn as much as possible about practical PPM and implement it once I get back to our headquarters.

Me: Will your executive management participate in the process?

S: No, unfortunately not. They are very busy people, you know ... But they assured me I would have their full support in this undertaking!

Me: So, who is going to create the scoring matrix, balance and strategic alignment models?

S: Hopefully I will do that once I am done with the course.

Me: Understood. Let me paint the following picture for you, and you can tell me at the end whether this sounds as a plausible scenario. You create the scoring matrix, balance and strategic alignment models. At one point of time you are approached by your company's CEO or Senior VP who asks you to add this "very important project" to the organizational portfolio and initiate it as soon as possible. However upon analyzing the proposal, you come back to you boss and tell her that the project will not be going ahead because it scored only five out of the possible 50 points in the prioritization model. What do you think her response will be?

S: She will ask me who created the model!

Me: And once you reply that the model was your creation, what is the likely response?

S: She will probably say something to the effect of that the creation of such models wasn't really in my domain of responsibilities.

The project to deliver the most expensive warship in the world is $2.3 billion over the budget and 2 years (and counting) late. The US Navy’s newest $13 billion aircraft carrier is still not ready for combat because of mechanical delays that have already put it two years behind schedule, according to the Pentagon’s top weapons tester.

The USS Gerald R. Ford (see Figure 1 for more info) was supposed to be ready by September 2016, but Michael Gilmore, the Defense Department’s director of operational test and evaluation, said in a June 28 memo that the warship had ongoing launch and recovery problems. 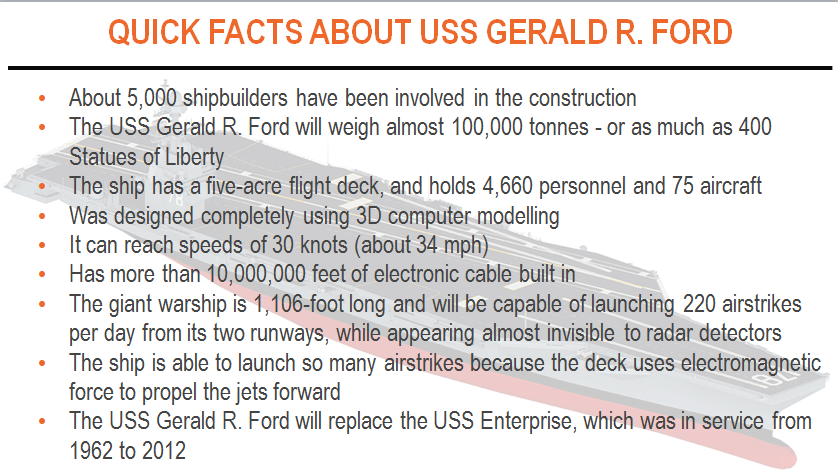 The construction of the ship started in November 13, 2009 and is still ongoing. Click on the video below to watch the time lapse. 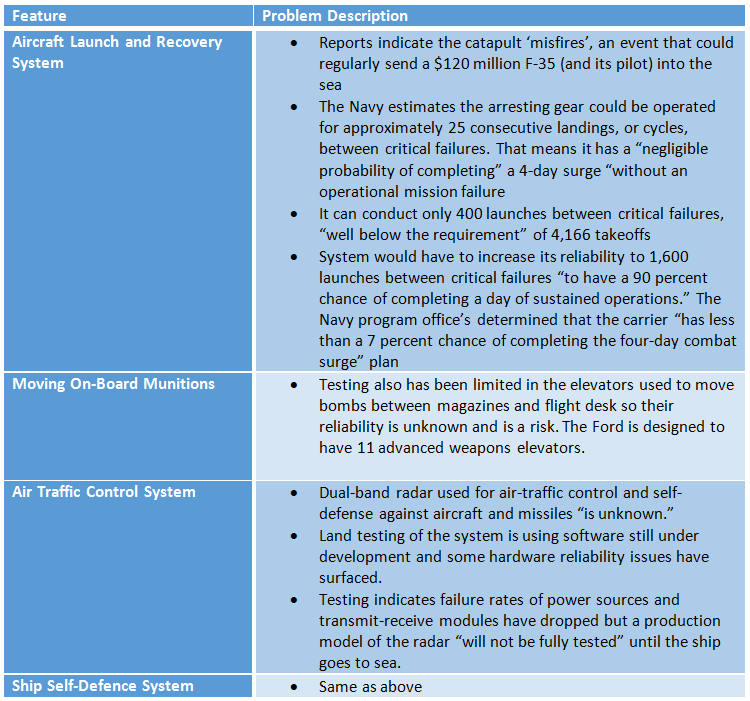 Let us try to analyze the root causes first.

However the some officials indicated that missed deadline can be attributed to the decisions made when the Pentagon committed to building the advanced ship in 2008.

"The decision to proceed with these three systems was made many years ago, prior to their maturation, when transformational approaches to acquisition were a DOD policy,"

Let us try to make some sense out of the information presented above:

When the Requirements Specifications is complete, the project manager (or the business analyst) must inspect the document with all the stakeholders in order to (along with other very important things) prioritize all of the project features and/or requirements.

Project features have to be prioritized for the following reasons:

However, the prioritization exercise could become a very painful process, especially when the project manager is working with the stakeholders who are not very familiar with the core principles of project management. As a result they frequently tend to counter every prioritization request with phrases like:

Everything in this document is equally important!

We have a “yes, we can” attitude at this firm!

Well, you ARE a professional project manager. Can’t you deliver all of these items on a tiny budget and a ridiculously aggressive timeline?

To address this problem I usually start my prioritization exercises by showing the stakeholders the following table (see Table 1):

Me: OK, now to the “Rear-view Camera” feature … How important is it?

Me: But if we throw it out, does it mean we have to abandon the entire project?

Stakeholder: No, not really … How about be assign it a “Should Have” status then?

Stakeholder (with an audible groan): OK then, let’s go with “Nice-to-Have” 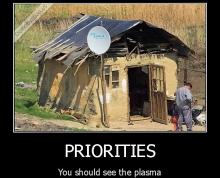 If you ask a person studying for a PMP exam, what is the most important area in the domain of project management, the correct answer is "communications". After all it has been documented that on average project manager spends up to 90% of his/her time performing communication activities such as conducting meetings, writing project documents and potentially eliciting requirements via one-on-one interviews.

While I wholeheartedly agree with this notion, I tend to think that the domain of communications is a bit too general to be designated as "the most important thing in project management". I would like to offer to look at this issue from a slightly different perspective:

If you were allowed to write just one project document on your project, which one would you choose?

My answer to this question is the “Requirements Specifications Document”. While some of you may vehemently disagree with me and mention Project Charter and Project Plan. But let us just think about this for a while. The domain of project management is divided into ten knowledge areas (see Figure 1)

Let us examine the impact of scope on other knowledge areas:

Time Management: If you don't have a detailed requirements document can you develop a work breakdown structure and create a network diagram (project schedule)?

Example: The project can take way longer if the customer decides to add a “swimming pool” feature to his villa design.

Budget Management: Can you create a detailed project budget - including human resources required and expenses on equipment and materials - until you have a baselined requirements document?

Quality Management: Can you define the acceptable quality levels and tolerances until you know all of features of the product? 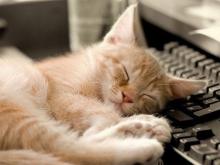